The CircuitLab Blog 40dB below the noise floor

Earlier today we released a few updates to the CircuitLab editor that we hope will make simulating your circuits a little bit friendlier. We have taken the most common causes of errors and made the editor produce more useful warning messages before you attempt to simulate the circuit.

Specifically, the CircuitLab editor will now warn you if you have duplicated a node or element name, have any disallowed characters in a node or element name, or if one of the numerical parameters does not correctly parse into a number. The new warnings will hopefully help you track down errors faster, so you can focus on designing your circuit.

If your schematic is being only used for display purposes and not for simulation, we continue to allow any characters you wish to insert in any of the fields. The new error and warning messages only affect simulation.

Keep the awesome feedback coming on the Support Forum!

It's now been one week since we publicly launched CircuitLab, and the feedback we have received so far has been fantastic. While developing CircuitLab over the past year, we never imagined in our wildest dreams that we would have reached so many people in our first week of being online. We would like to take this opportunity to sincerely thank all of you for helping make our launch a great success!

We developed CircuitLab with the intention of filling a gap that we felt was unserved by the existing crop of circuit simulation and schematic capture tools, but we never envisioned that our tool would elicit such a strong response from so many people from around the world. Here is just a small sample of the comments we've heard so far:

"If you love your electronics, this is immensely cool. Complete with time and frequency domain analysis."
- Rachel Blum on Google+

"Cool man, we're in the electrical part in physics class right now. You couldn't have posted this at a better time."
- tjjex on Reddit

"Wow. I'm pretty sure my inner electrical engineer just had a nerd-gasm. Guess I know how I'll be spending the rest of my weekend."
- kringg on Engadget

"A surprisingly full featured app for sketching out schematics and simulating them that lives entirely in the browser. It's also amazingly user friendly and simple for even the novice hobbyist to dive into."
- Terrence O'Brien on Engadget

"Wow. This is by far the most intuitive, easy to use SPICE tool I've ever used. [...] I don't understand why every circuit simulator out there has to have the such a backwards, difficult to use interface. LTspice was a big step forward compared to PSpice, but this time someone finally got it right."
- Projectile on VintageSynth.com

"It's the ability to share circuits which rocks. This will become a standard - not for designing circuits - but for 'Publishing' them."
- bGatti on DIY Drones

"I've been struggling with the analysis software aspect of a beginning circuits class I'm teaching. Some students have PCs, some Macs [...]. The fact that there was not one universal platform made it difficult to help half the class. This is perfect for what I was looking for. [...] Really beautiful. Thank you."
- dsdtzero on CircuitLab forums

Just as valuable as the praise, though, is the incredible amount of feedback we have received about how we can make CircuitLab even better. As evidenced by the rapidly growing number of the things on the "to-do" whiteboard in our office, CircuitLab as a tool is not finished yet, and we intend to keep working to make CircuitLab the ideal place to sketch, simulate, and share all electronics projects -- be it for school, work, or play!

All the feedback we've heard has confirmed that there is a need for a tool like what we envision CircuitLab to be (and to become) -- a tool where building and simulating circuits feels right. With the launch of CircuitLab's schematic editor and circuit simulator, we have taken the first steps towards making that a reality, and with all your continuing feedback and support we will get there faster than you can say "Schottky diode"!

We're looking forward to the coming months to see how CircuitLab will be used by the already awesome online electronics communities around the web. Thanks again for being a part of it!

Mike and Humberto
The CircuitLab Team

Good news! The CircuitLab editor now supports the use of the Command key for the common keyboard shortcuts instead of requiring the Control key. 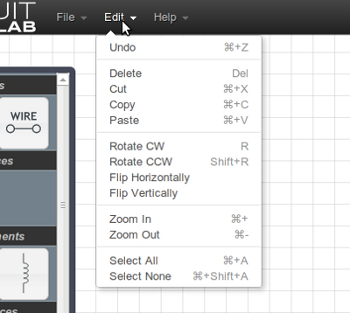 We want CircuitLab to feel as much like a desktop application as possible for all of our users, so since launch our programmers have been working to resolve a few of the issues Mac OS X users were encountering with our interface. The keyboard shortcuts for Copy, Cut, Paste, Undo, Select All, and Save can now be triggered by using the Command key, which should feel more natural for Mac users instead of having to reach for the Control key.

In addition, panning around a circuit can now be done with Command + mouse drag, instead of using Control + mouse drag which will trigger a right click menu on Macs.

Mac users can also now delete selected items with the Delete key on their keyboard.