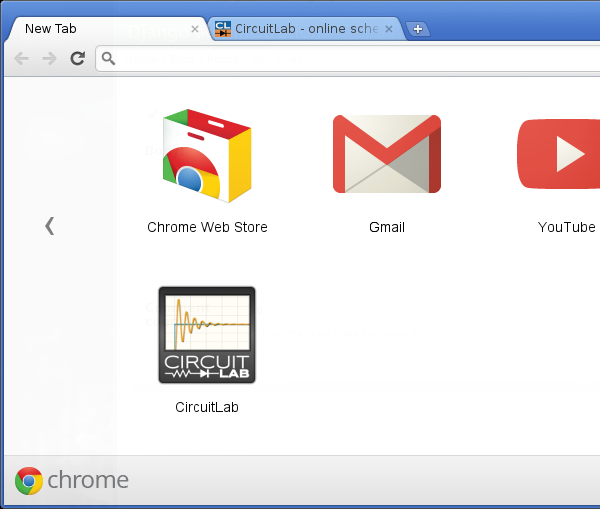 The Chrome Web Store features apps that are pushing the limits of what browsers can do, just like CircuitLab does in the circuit simulation and schematic capture world. Install the CircuitLab app and enjoy!

(SAN DIEGO) -- CircuitLab today announced a transition from the field of online circuit simulation to online browser-based games with the launch of “Circuit-oids”, now available at https://www.circuitlab.com/.

“Non-linear circuit modeling in the browser was a field we were happy to introduce to the world, but let’s be honest -- it was really hard. When our users started requesting custom behavioral sources and vacuum tube models, we started to realize that building software for the online entertainment market was a much easier technical task,” said Mike Robbins, CircuitLab’s developer of simulation components.

“We were in the middle of writing a new plotting library to give more powerful graphing tools to our users, but at some point we realized that we’d basically written most of a browser-based vector game engine. At that point, pivoting to the Circuit-oids model was a no-brainer,” said Humberto Evans, CircuitLab’s user interface developer. “Our online schematic editor made a lot of users happy, but the gaming angle lets us do that much more directly.”

Circuit-oids can be found at www.CircuitLab.com until further notice. If it happens to disappear in the near future, like Monday Morning, the developers suggest that there might be special ways to activate it within the CircuitLab editor.

While CircuitLab has a US-based team of developers, we've been pleasantly surprised by how much international attention our tool has received over the past few weeks. We've seen articles and posts about CircuitLab in Chinese, Czech, French, German, Greek, Italian, Japanese, Polish, Portugese, Russian, Swedish, and Spanish. In fact, we've got just about as many website visitors from Europe as we do from North America!

The resistor is the most basic of circuit elements, and it's often the most common discrete component in many analog circuits. Many Americans are used to seeing a "squiggle"-styled line segments like we've included in CircuitLab. However, in the rest of the world, the normal resistor symbol is just a simple outlined rectangle (the IEC-standard symbol choice).

Today we've added support for the IEC / European style resistor symbol. Simply double-click the resistor and change its display type "DISP" parameter from US to IEC. Everyone deserves to have a pleasant circuit-drawing experience, and CircuitLab is here to help! 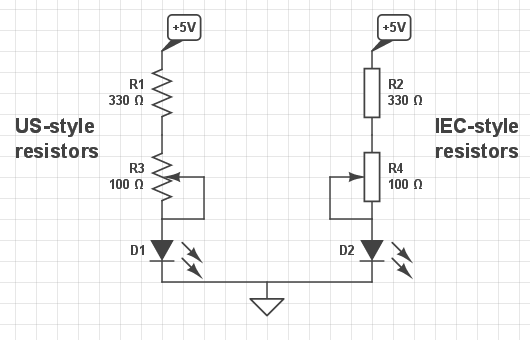