This circuit would not converge with old JFET model. CircuitLab fixed the model. 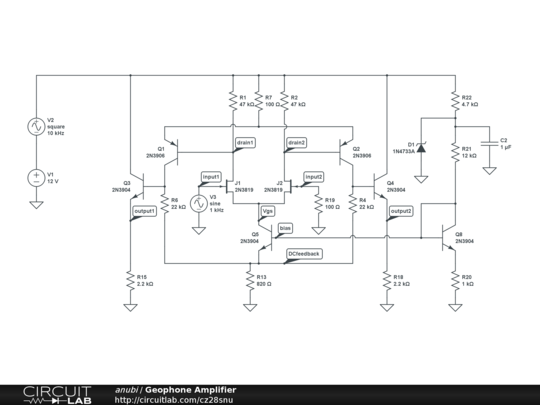 This circuit shows a convergence problem. Run the DC solver under the Simulate tab and note some really strange readings.

Later fix...I have been contacted by CircuitLab about the JFET model. The simulation is now working!

I have completed the model ; it is now almost identical to the field unit. DC operating point is by varying R13 or R20.

Originally designed as a geophone amplifier In the field. I had microvolts of signal to work with, and often had to get it to the truck several hundred feet away. Power draw had to be low as dozens of these were running simultaneously off the truck battery. I had to do it with parts available at the time. I wanted it robust as possible, but also inexpensive as possible.

Once I got the signal's impedance low, and differential, I could send it for a mile easily over plain old twisted pair telephone cable. Once I had a PCB taped out, I could crank these out by the hundreds in the shop. Dual-transistor cans. ( J1:J2, Q1:Q2, Q3:Q4; Q5:Q8 ) will keep the circuit as balanced as possible.