A n-channel MOSFET switches an inductive load, both with and without a diode to catch the voltage spike. 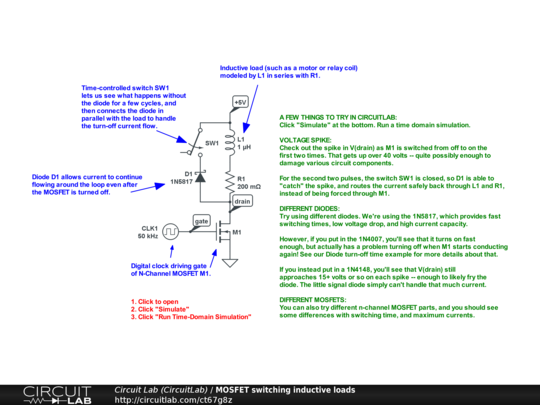 This simulates a MOSFET being used to switch an inductive load, as is common in lots of power electronics problems, like controlling a motor or making a DC-DC voltage converter.

A few things to try in CircuitLab

Load the simulation by clicking "Open in editor" above, and then click "Simulate" at the bottom. Run a time domain simulation.

Check out the spike in V(drain) as M1 is switched from off to on the first two times. That gets up over 40 volts -- quite possibly enough to damage various circuit components.

For the second two pulses, the switch SW1 is closed, so D1 is able to "catch" the spike, and routes the current safely back through L1 and R1, instead of being forced through M1.

However, if you put in the 1N4007, you'll see that it turns on fast enough, but actually has a problem turning off when M1 starts conducting again! See our Diode turn-off time example for more details about that.

If you instead put in a 1N4148, you'll see that V(drain) still approaches 15+ volts or so on each spike -- enough to likely fry the diode. The little signal diode simply can't handle that much current.

You can also try different n-channel MOSFET parts, and you should see some differences with switching time, and maximum currents.