I wanted to control a computer’s fan speed by the air temperature at the “hot spot” (the power supply air outlet). The project consists of three parts for easy simulation and was later verified on a breadboard and connected to the target device.

This is the project’s description and the main part, a variable PWM timer. 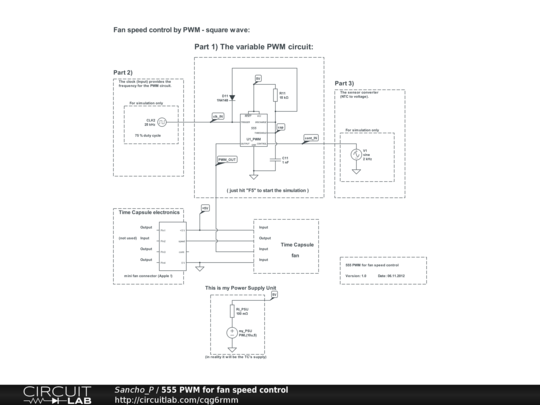 The fan I want to control is a 4 - wire mini fan in an Apple device, running at 5 Volts supply (not the common 12 V type !!!). However, the control pin is always operated at logic level with internal pull up (to 5 or 3.3 Volts). Here it is 5 Volts (of the fan) with a 2,7 k pull up resistor - so ‘disconnect’ means full speed. But the original electronic, if connected, limits this voltage to 3.3 V.

The device is an Apple “Time Capsule”, thermally designed obviously by Laurel and Hardy. Take care, also the Apple fan connector is not standard pin out.

When the TC starts up, the fan originally is fully on for 1 second, then going back to about 30 % speed for 25 seconds and finally cut off completely. This is the normal procedure, as the fan per se is useless. Only after several modifications the fan could help - if it would be running, of course.

However, there is a temperature sensor attached to the internal HD, the fan will come on again just when it starts burning. But before this happens the capacitors from the power supply will dry and explode. [/rant]

My speed “control” is done by a NTC (S861) placed close to the “hot spot” - the power supply (“air outlet”). There is no set point to be adjusted, and the fan’s speed feedback is not used here, so it is still connected to the TC’s electronics (3.3 Volts), which doesn’t care if the fan is on but should not.

The project consists of three parts:

1) The variable PWM circuit, a 555 timer, with inputs for clock and control (sensor).

For fast / easy design as well as simulation these three parts were built separately in CL.

All parts are ready to simulate and also contain drawing elements to represent the whole project, just to hit “F5” to start the last “working” simulation on each part.

The variable PWM circuit accepts a clock input for the 25 kHz and the control input to set the duty cycle.

This circuit is very similar to an official CL example for PWM using the 555 timer. Additionally here is a diode used to restart the output at high PWM duty cycle, otherwise the signal would suddenly drop in frequency instead of going to 100 % duty cycle (this can be seen in the simulation of the CL example).

The output of the PWM - circuit is used directly to control the fan’s speed input (which is pulled up in the fan by about 2.7 k to the 5 Volts supply when disconnected from the TC). The original signal from the Time Capsule circuitry to “control” the fan is useless so I simply disconnect it.

In this simulation I use my own Power Supply Unit to supply the circuit because I want to simulate a power ramping up in 10 usec with RI = 100 mOhm. Using CL’s voltage sources is tricky as these are “ideal” sources.

The other two parts are:

Part 2) 555 clock for fan speed control A simple 555 timer circuit. It could be used to directly set the fan speed to a fixed value, but I want to “hear” the temperature of my Time Capsule. The timer output is used to trigger the main PWM timer.

Part 3) NTC converter for fan speed control The sensor is a NTC with 10 kOhm at 25 °C and about 2 kOhm at 65 °C. This should set the fan from minimum speed (… maybe never in this case, about 15 W in less than a cigarette-box-power supply, state of the art ...) up to full speed (about 40 W power supply dissipation on full load).

To adjust the converter usually I’d use my breadboard, but: It’s easy to pick the resistance values for the desired curve (temp / voltage) from the CL simulation.

Trying to run the three parts together? Not really a big problem in CL! See: NTC fan speed control

For more info about PWM and fan control see:

Take care: Apple have their own fans, also to be found in the Internet … :-)

For more info about dead Time Capsules and repair: