A shell resonance drum oscillator for toms, bongos, bass drum and such. It works on breadboard though I used an arduino instead of the 555 to send pulses (0.1 sec) and a TL072 instead of the LM741. 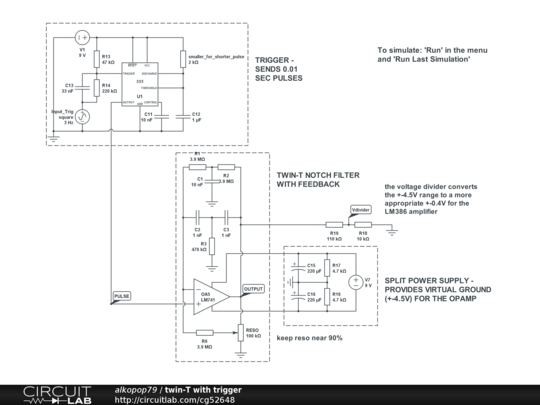 The circuit consists of a trigger unit, a notch filter with resonance feedback and a split rail circuit. The trigger unit sends a short, 0.1 second pulse. The two 'T's form a lowpass and a highpass filter. The feedback is set with the 100K pot (might be worth adding a 1K pot in parallel for fine tuning). The pulse excites the filter that starts oscillating. The waveform is a damped sinusoidal wave. As the pulse passes, the capacitors store charge for a while and the circuit still oscillates with decreasing amplitude.. However as the caps run out of juice, the oscillation stops.

It works on breadboard though I used an arduino instead of the 555 to send pulses (0.1 sec) and a TL072 instead of the LM741. So far have only checked with oscilloscope and the waveform is consistent with what's expected.