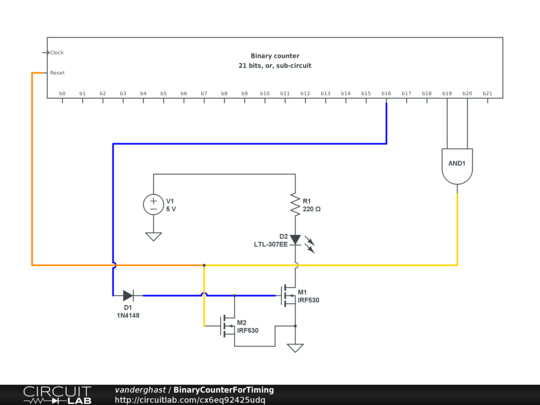 Assume a 32768 Hz clock. It counts from 0 to 32768 in one second. We wish that the LED turns on after 2 seconds. So, when the bit 16 of the timer switches to a level high, the NMOS M1 turns on, and the LED turns on. Unfortunately, b16 will turn off 2 seconds later. But the diode D1 "lactches" the gate capacitor at its level high, since the gate of M1 has no path to ground. So the LED stays on. When both b19 and b20 become high for the first time, about 45 seconds after the LED turned on, the output of the AND gate AND1 turns high.which has two consequences. First, its turns on the NMOS M2, which allows the gate of M1 to discharge to ground, which turns M1 off, wich turns the LED off. Also, the output of AND1 reset the counter to 0, so the process restarts. At that restart, AND1 output turns to a logical low, which discharge the gate of M2, turning M2 off. WARNING: The circuit has not been tested.