LED lights based upon resistance of photoresistor and potentiometer 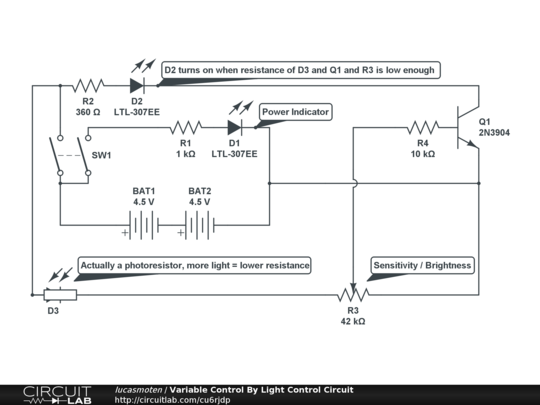 This circuit uses a photoresistor, LEDs, a NPN transistor, potentiometer, fixed resistors, and a DPST switch. The DPST is being used as a power on/off switch for two different circuits.

The first is a simple LED circuit using only BAT1 for its power supply and acts as a Power Indicator. When D1 emits light, you know the other circuit has power.

The second, or outer circuit, is intended to light up D2 when the resistance from D3 and R3 are low enough. D3 represents a photoresistor. When it is dark, resistance is high. When light shines on it, resistance is lower. R3 is a potentiometer acting as a sensitivity or brightness controller. With variable resistance up to 42K, as resistance is lowered, the total along with D3 lowers feeding into the base of Q1. As more voltage applied to the transistor, meeting with that of the collector, it goes out through the emitter allowing the path to the collector to move, thus causing D2 to light.