A way to run an opamp from a single supply. Works particularly well with opamps not specifically designed to run from single supply rails. 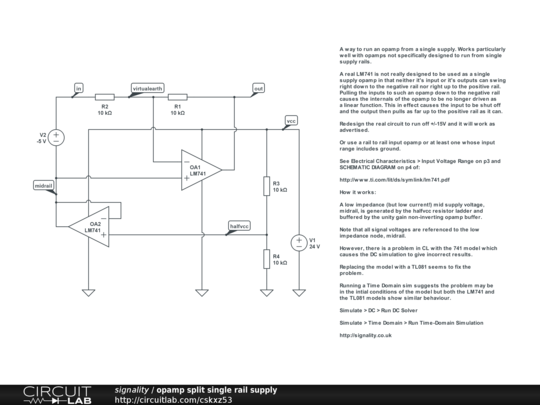 A way to run an opamp from a single supply. Works particularly well with opamps not specifically designed to run from single supply rails.

A real LM741 is not really designed to be used as a single supply opamp in that neither it's input or it's outputs can swing right down to the negative rail nor right up to the positive rail.

Pulling the inputs to such an opamp down to the negative rail causes the internals of the opamp to be no longer driven as a linear function. This in effect causes the input to be shut off and the output then pulls as far up to the positive rail as it can.

Redesign the real circuit to run off +/-15V and it will work as advertised.

Or use a rail to rail input opamp or at least one whose input range includes ground.

A low impedance (but low current!) mid supply voltage, midrail, is generated by the halfvcc resistor ladder and buffered by the unity gain non-inverting opamp buffer.

Note that all signal voltages are referenced to the low impedance node, midrail.

However, there is a problem in CL with the 741 model which causes the DC simulation to give incorrect results.

Replacing the model with a TL081 seems to fix the problem.

Running a Time Domain sim suggests the problem may be in the intial conditions of the model but both the LM741 and the TL081 models show similar behaviour.