2-stage amplifier for RTDs with feedback from 1st stage controlling the gain on 2nd stage. 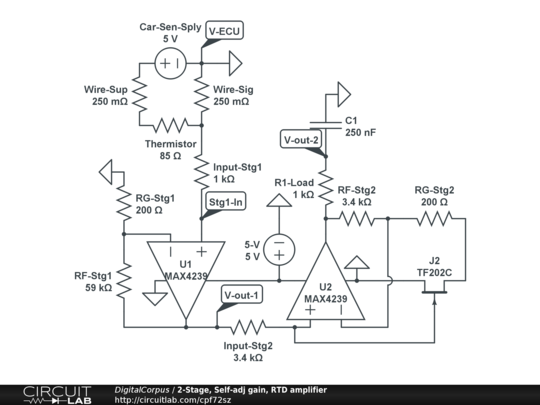 This circuit is for sensing the voltage drop across an automotive RTD used for ambient air, charge, coolant, or oil temperature applications. The input is high impedance so the output to the vehicles computer is minimally affected.

Due to the logarithmic response of the voltage drop, a logarithmic amplifier is desired. However, since that type of amplifier's gain is dependent upon temperature, it's behavior will be difficult to characterize and predict. This circuit uses a 2 stage approach. The first is to provide initial base gain, which subsequently determines the lowest value that can be detected, which then feeds back into the second stage.

The feedback is applied to a JFET acting as a variable resistor. When the output of the 1st stage reaches a high enough point, the JFET slowly turns on and reduces the gain of the 2nd stage. The resulting response is an inverted 'S' curve.

Feedback resistor of 2nd stage and the input resistor of stage 2 have to stay matched for the voltage divider to function properly. Gain resistors of both stages are matched for simplicity. The majority of gain has to occur in the 1st stage. Circuit is designed for a 85 to 40K ohm RTD/thermistor, with an output of 0 to 3.3 V.