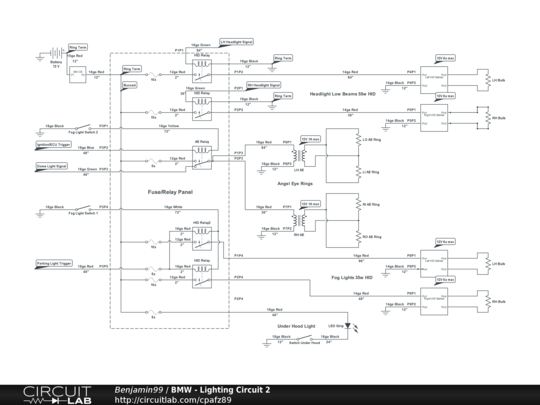 Same as BMW - Lighting Circuit 1, however, made changes to accommodate using a bussed fuse/relay panel (Bussmann 15303-5-2-4), decreased individual fuse ratings, and broke out the HID's into 2 relays each so that I am not splicing into a single terminal ("Y" style).

11/26/2012 - The fog light circuit will not work like this. Using 2 relays off the same switch is proving to be unsuccessfull when wired in parallel. I may try to wire them up in series and see if that works. It was appearing to me that I was not getting enough voltage off of the switched line to keep both relays open (and using that same power source for the Angel Eye relay circuit. If i would tap the fuse panel, the relay would disengage and lights would go out. Re-wired using 1 relay to power both fog lights and successful so far.