Two LEDs driven by a shared vs separate resistors -- how does current split if the two LEDs are slightly different? 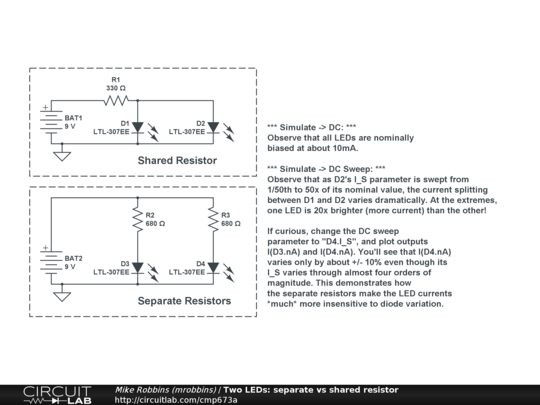 Try running the DC Sweep simulation, and you'll see that if we adjust D2's saturation current (I_S) from 1/50th to 50x of its initial value, the current splitting between D1 and D2 varies by a tremendous amount. At the extremes, one LED is 20x brighter than the other (brightness proportional to current). One LED is twice as bright as the normal "matched" case, and the other is operating at less than 10% of its nominal output.

However, if you change the sweep parameter to "D4.I_S" so that D4 is the one getting modified instead of D2, and then add plot outputs I(D3.nA) and I(D4.nA), you'll see their currents stay much more constant despite the same diode variation! In fact, D3's current remains unchanged, while D4's varies only by about 10%.

A fair question! The basic DC diode equation looks something like:

In forward biased mode, VD is many times (N*Vth), so the exponential part is huge -- much greater than one -- so we can approximate:

and then use some natural logarithms:

This tells us the diode voltage drop for a given current. But what if the one diode is slightly different than another? How does a change in IS affect the diode voltage? For diode #2, replace IS with k*IS:

Now look at the difference in the two diode voltage drops needed to achieve the same current (as for LEDs, brightness is proportional to current).

For these LEDs, N is about 5.4, and Vth is about 26mV at room temperature. The LTL-307EE datasheet (datasheet courtesy of Octopart) promises a "typical" forward diode drop of 2.0 volts at 20mA, and a "maximum" of 2.6 volts. That's a huge range!