10 BJTs and an op-amp provide a gain of almost +70dB and about 16kHz bandwidth. A cascoded active load provides high-impedance load for the emitter-coupled pair. 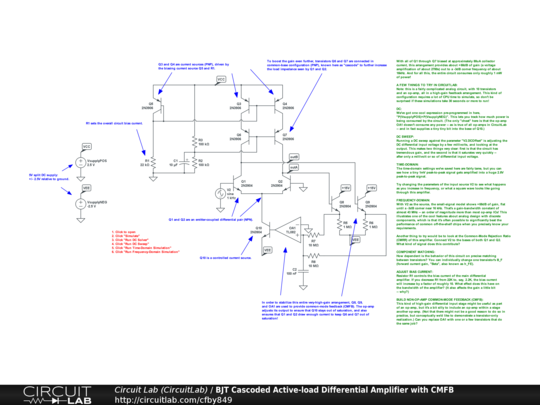 Q1 and Q2 are an emitter-coupled differential pair.

To boost the gain even further, transistors Q6 and Q7 are connected in common-base configuration, known here as "cascode" to further increase the load impedance seen by Q1 and Q2.

With all of Q1 through Q7 biased at approximately 80uA collector current, this arrangement provides about +68dB of gain (a voltage amplification of about 2700x) out to a -3dB corner frequency of about 16kHz. And for all this, the entire circuit consumes only roughly 1 mW of power!

Q10 is a controlled current source.

In order to stabilize this entire very-high-gain arrangement, Q8, Q9, and OA1 are used to provide common-mode feedback (CMFB). The op-amp adjusts its output to ensure that Q10 stays out of saturation, and also ensures that Q1 and Q2 draw enough current to keep Q6 and Q7 out of saturation!

A few things to try in CircuitLab

Note: this is a fairly complicated analog circuit, with 10 transistors and an op-amp, all in a high-gain feedback arrangement. This kind of configuration requires a lot of CPU time to simulate, so don't be surprised if these simulations take 30 seconds or more to run!

We've got one cool expression pre-programmed in here, "P(VsupplyPOS)+P(VsupplyNEG)". This lets you track how much power is being consumed by the circuit. (The only "cheat" here is that the op-amp OA1 doesn't consume any power -- as is true of all op-amps in CircuitLab -- and in fact supplies a tiny tiny bit into the base of Q10.)

Try changing the parameters of the input source V2 to see what happens as you increase in frequency, or what a square wave looks like going through this amplifier.

With V2 as the source, the small-signal model shows +68dB of gain, flat until a -3dB corner near 16 kHz. That's a gain-bandwidth constant of almost 43 MHz -- an order of magnitude more than most op-amp ICs! This illustrates one of the cool features about analog design with discrete components, which is that it's often possible to significantly beat the performance of common off-the-shelf chips when you precisely know your requirements.

Another thing to try would be to look at the Common-Mode Rejection Ratio (CMRR) of this amplifier. Connect V2 to the bases of both Q1 and Q2. What kind of signal does this contribute?

How dependent is the behavior of this circuit on precise matching between transistors? You can individually change one transistor's B_F (forward current gain, "Beta", also known as h_FE).

Resistor R1 controls the bias current of the main differential amplifier. If you decrease R1 from 22K to, say, 2.2K, the bias current will increase by a factor of roughly 10. What effect does this have on the bandwidth of the amplifier? (It also affects the gain a little bit -- why?)

This kind of high-gain differential input stage might be useful as part of an op-amp, but it's a bit silly to include an op-amp within a stage another op-amp. (Not that there might not be a good reason to do so in practice, but conceptually we'd like to demonstrate a transistor-only realization.) Can you replace OA1 with one or a few transistors that do the same job?