A time-controlled switch can be used to force an inductor to start with a given current through it. 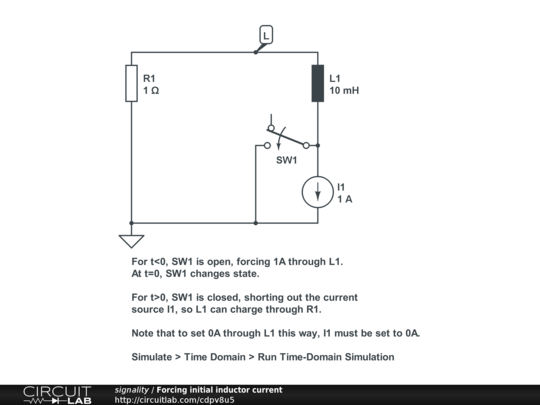 Run the time-domain simulation and you'll see that when SW1.T = 0, the switch is open circuit, allowing I1 to for it's current through the inductor up to and including the instant t=0, and then becomes closed so that the current source is shorted out and the current through the inductor is then free to change under the influence of the external circuit.

Using the parameter sweep functionality of the solver, I've also asked it to plot the same voltages and currents, but using SW1.T=10m, so that the switch stays open until 10 milliseconds into the simulation. This helps visualize what's going on for the time period t<=0 in the original (SW1.T=0) simulation.

(Text and simulation timings with acknowledgement to @mrobbins from his original example: