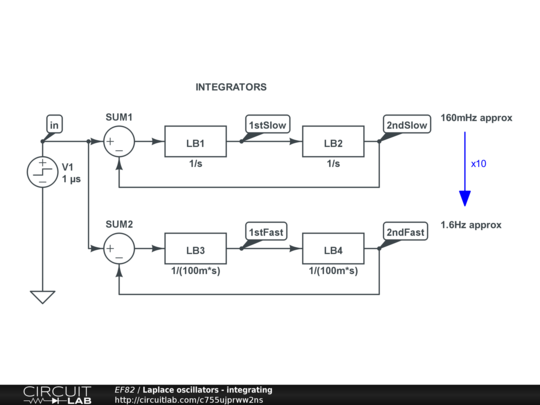 Exploring further some theory from earlier posts, in 2012 - see below.

The Laplace block with a single "1/s" is an integrator. By connecting two in series (cascade), with an inversion, an oscillator is formed. Described another way, this is a solution to a 2nd order differential equation of motion.

In the circuit there are two such oscillators, the Fast one runs at 10x the frequency of the Slow one. This arrangement is necessary because this is the closest I can see as a way to display two different simulation time steps on the same plot/graph.

A "perfect" oscillator should not decay, but see this (very long) post thread from 2012 https://www.circuitlab.com/forums/support/topic/47yds792/rlc-resonant-circuit/

The Time Domain simulation here is set up to be 50S with a step of 50uS. When the two oscillator outputs are plotted you can see that the amplitudes both decay. The Slow output drops only very slightly, about 0.1%. The Fast output's drop is more obvious. On the given scale the decay seems linear, but on other scales it is clearly exponential.

I would like to experiment with much smaller time steps, but my 32-bit system is on the point of overload with the plot files of 2*10^6 points. Time to get a 64-bit machine?