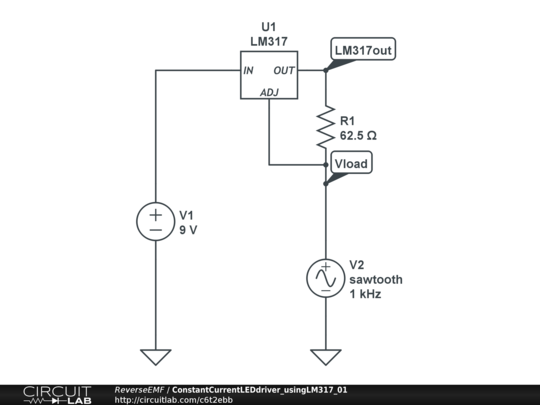 Using an LM317 to drive an LED with a fairly constant current (actually, an LM317L would be more appropriate for current level of 20ma, the I wasn't able to find an LM317L model). The values are set to drive an LED at around 20ma. As the Out to Adj reference voltage can be anywhere from 1.2 to 1.3 volts, the source current value will vary accordingly.

The Sawtooth generator simulates the range of possible LED forward voltages, based on the typical and max specifications found in LED data sheets for low power LEDs. For example, most IR LEDs run at a forward voltage of 1.0V to 1.2V. Red LEDs can be anywhere from 1.7V to a little more than 2V. A Blue or White LED can go as high as 4V according to most White LED data sheets (though I have never seen that in practice, except on LEDs that have been heat stressed).

This is a very stable current source, but it has a fairly high dropout voltage: up to 1.3 + ~2.3 or 4.6V! Because of this, it makes more sense to use this to drive a series of LEDs rather than just one. But, there is actually a better IC for this: the CL520 by Supertex -- with a mere 1V dropout voltage! It also can function at up to 90V!! The LM317 maxs at 35 to 40 volts, depending on the manufacturer.

If you run the Time Domain simulation you will see that the current stays perfectly constant over the full 1V to 4V range.