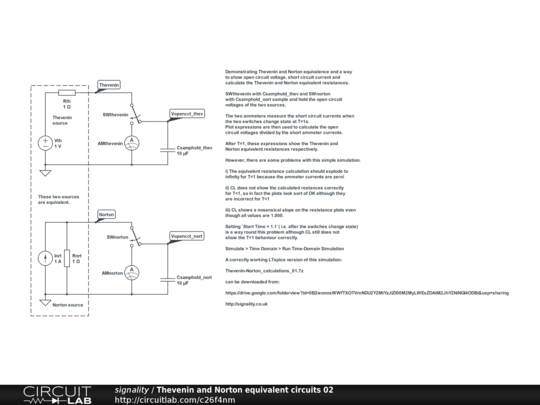 The two ammeters measure the short circuit currents when the two switches change state at T=1s.

Plot expressions are then used to calculate the open circuit voltages divided by the short ammeter currents.

After T=1, these expressions show the Thevenin and Norton equivalent resistances respectively.

However, there are some problems with this simple simulation.

i) The equivalent resistance calculation should explode to infinity for T<1 because the ammeter currents are zero!

ii) CL does not show the calculated restances correctly for T<1, so in fact the plots look sort of OK although they are incorrect for T<1

iii) CL shows a nosensical slope on the resistance plots even though all values are 1.000.

Setting Start Time = 1.1( i.e. after the switches change state) is a way round this problem although CL still does not show the T<1 behaviour correctly.

A correctly working LTspice version of this simulation:

can be downloaded from: